The Window Sex Project: An Update

Unless you've been under a rock in the past 48 hours, you have by now seen the infamous viral video on street harassment of a woman walking for 10 hours in New York City. This video has brought the conversation on street harassment from a buzz to a ROAR in mainstream media, faster than I was prepared for. Seriously, yesterday so many important interweb conversations were happening that I could not even fully participate in because... hello life. hello jobs that pay my rent. So I'm not EVEN gonna try.

What I am gonna do is direct you to Ebony.com where Senior Editor Jamilah Lemeiux breaks it down so it can forever be broke. She begins with a childhood memory about witnessing her mother being harassed. Lemeiux writes:

So began my introduction to the pain of street harassment, the toxic byproduct of a global patriarchy; a set of behaviors that are condoned, if not affirmed, by the widely-held belief that women’s bodies belong to the public and that leaving one’s home means that you are available, accessible and ripe for the picking.


II. THE WINDOW SEX PROJECT by the NUMBERS

SLMDances' work on street harassment with The Window Sex Project is ongoing. Since we began this work in 2011, organizing with women in Harlem to create a space for them to share their stories and feel whole despite the constant barrage of unwanted attention in public space, we have built consciousness on street harassment with direct engagement of more than 1500 people. Which means our work - addressing street harassment through the use of the body (the site of harassment) and art making - is echoing into the world beyond what I could ever imagine. We have illuminated the street harassment conversation through:

As well as:
1 Short Documentary Film on our Premiere Performance
1 Short Film [in Post-Production]
1 Scholarly Essay [in process]

Every new dancer who comes into the company is introduced to this issue, SLMDances' method of organizing, the choreography + performance itself, and how to facilitate our community workshops. I didn't know it when I started this work, but we are going to be dancing this dance until a significant cultural shift ACTUALLY OCCURS. When women are allowed TO BE, in their own right, in public space.


III. SEE FOR YOURSELF.

The Window Sex Project is one of those things that you have to see and experience for yourself to fully absorb. Click some links below. Comment, email, tweet or facebook to continue the conversation.


IV. ORGANIZE WITH US.

We want to do this work. We want to dance with you. We want to create space for women's + LGBTQ stories. We want to have organized community conversations that facilitate understanding amongst the genders. We want to break through patriarchy and institutional racism and other structural oppressions that reveal themselves with something as simple as a walk down the street.

If you want to help us do this work:

EMAIL us at sydnielmosleydances@gmail.com to make a plan.
DONATE to the company Sydnie L. Mosley Dances, so the artist-activists who do this work can be compensated for their talents and passion.

Posted by Sydnie Mosley at 12:32 PM No comments:

IASHW 2014! We're Dancing in the NYC Community this week! 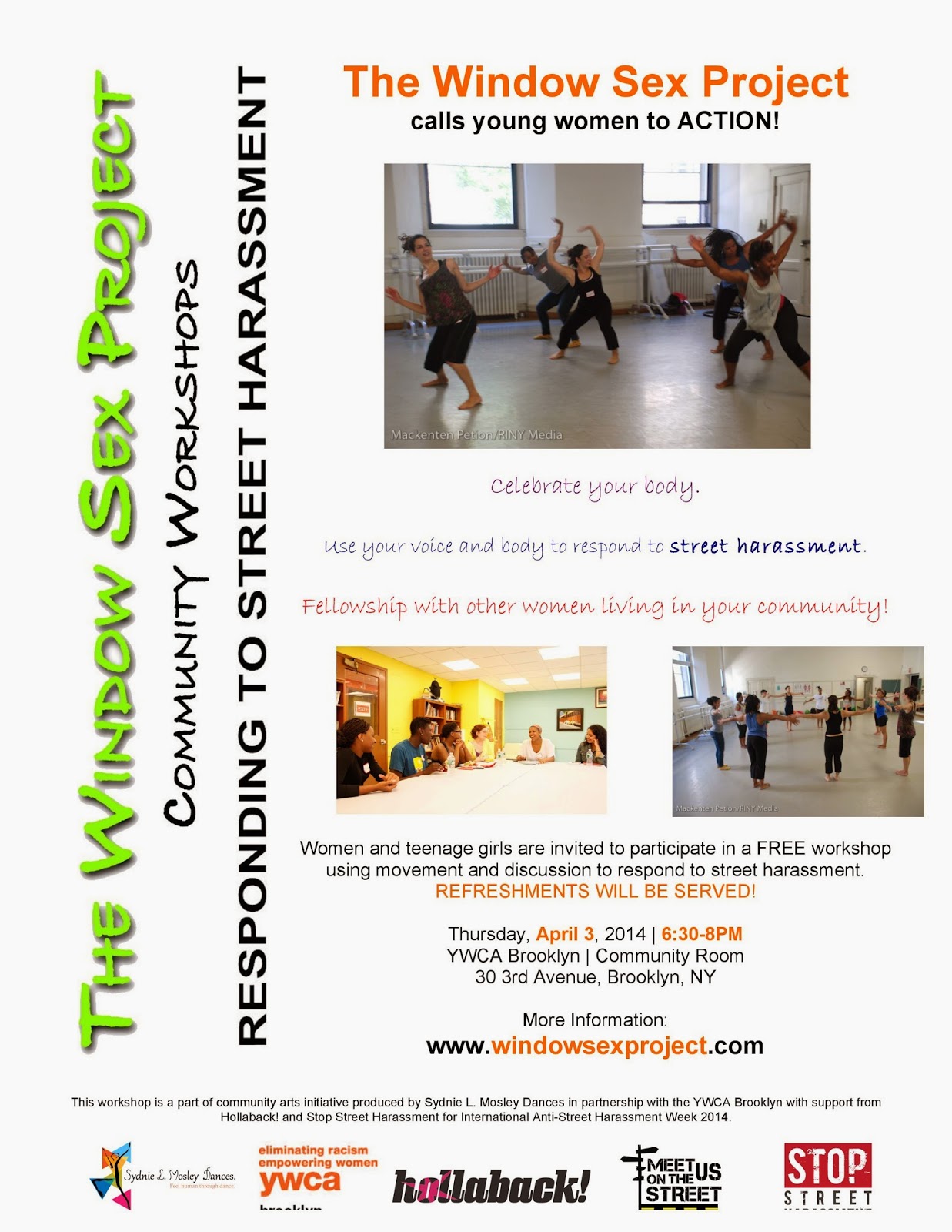 Register HERE!
Posted by Sydnie Mosley at 3:13 PM No comments:

The Window Sex Project goes on the road!

And we couldn't be more thrilled. :) 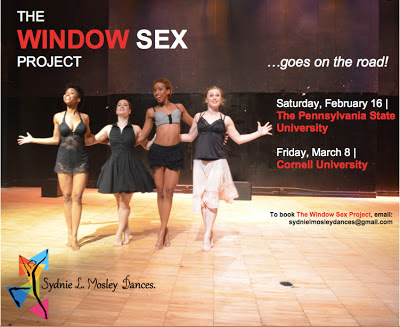 Bring the dance-activism to you: http://www.sydnielmosley.com/#!repertory/c1704
Posted by Sydnie Mosley at 3:22 PM No comments:

Email ThisBlogThis!Share to TwitterShare to FacebookShare to Pinterest
Labels: Announcements

This evening, while doing my usual social media check-in I ran across this video and girl, it hit home. Especially on this cold wintery day in New York City in my dance teacher travels. Each time I walked out today, I was suited in my down coat complete with furry hood that practically covers my eyes, and on the bottom all that was visible: my baggy high water sweat pants and clogs -- all black everything. Despite my covered and not particularly attractive attire I received a total of: one (1) "Hey Baby," two (2) "psst psst," and one (1) assertive "Hey Sexy," as if he were addressing me by name. I could have been wearing a potato sack, or the most revealing red dress on earth -- it wouldn't matter. The harassment comes all the same.

I mention this because earlier this year during the creative process for The Window Sex Project, I got into some deep discussions with my dancers about how much sexy is too much sexy? which led to this post: Causing to Stumble by cast member Alexandra Joye Warren. Part of this post questions a woman's responsibility to not provoke a man - in this case by not wearing revealing clothes; but as we see with my above anecdote, the disrespect comes regardless of dress.

Enter Laci Green's vlog below on slut shaming. The reason it hits home for me is because blaming women who wear revealing clothes for the harassment and assault they experience is slut shaming-turned-victim blaming. We often judge a woman's choice to wear revealing or tight-fitting clothes as a marker of low self-esteem, no self-respect and or make assumptions about her sexuality (some version of she's a "bad girl"), none of which may be true. Wearing that outfit could be her well thought out choice.

Read more »
Posted by Sydnie Mosley at 9:00 PM No comments:

Email ThisBlogThis!Share to TwitterShare to FacebookShare to Pinterest
Labels: photo, Share your story, Thoughts on the Issue

Have you ever shut up or confused a street harasser, gotten an apology from one, or successfully reported one? Then I want to hear your story! Please fill out the form below.

Your story may be included in a forthcoming book featuring 50 empowering stories about stopping a street harasser.

Please email a photo of yourself (any kind, but please send the highest resolution you have) to go along with the story and send it to StopStreetHarassment@yahoo.com

Read more »
Posted by Sydnie Mosley at 8:21 AM No comments:

By collecting women and LGBTQ folks’ stories and pictures in a safe and share-able way with our very own mobile phone applications, Hollaback! is creating a crowd-sourced initiative to end street harassment. Hollaback! breaks the silence that has perpetuated sexual violence internationally, asserts that any and all gender-based violence is unacceptable, and creates a world where we have an option—and, more importantly—a response.

Now the New York Civil Liberties Union has caught on. From The Root:


Stop-and-Frisk App Users on the Rise

The Android tool for recording police wrongdoing has taken off since its release last week.

Ever witnessed what appeared to be police harassment and wished that you could do something about it? Now you can. On June 6 the New York Civil Liberties Union rolled out its Stop and Frisk Watch smartphone app, a tool that lets bystanders record and report unlawful police encounters.

Since its debut, more than 75,000 people have downloaded it, and thousands of videos have been submitted. "Our staff is monitoring the videos as they come in," NYCLU spokeswoman Jennifer Carnig told The Root. The clips will then become an active part of the organization's campaign to end stop and frisk -- the policy in which New York City police can interrogate and search residents without cause. The images will be included in the group's public-education, communications and lobbying efforts and may also be used to litigate cases against officers.

"The NYPD tells New Yorkers that if they see something, say something, and the NYCLU agrees," explains Carnig, whose group is co-organizing a silent march on Sunday to protest stop and frisk. "If people see police misconduct or an inappropriate stop and frisk, we want them to have the tools to say something about it."

Have you downloaded mobile apps to report street harassment??

Posted by Sydnie Mosley at 7:23 AM No comments: 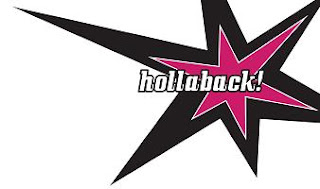 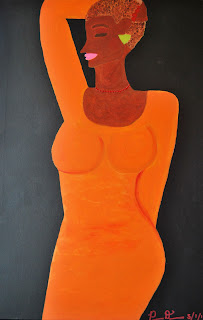